What is Microsoft Windows ?

Microsoft Windows is a Series of Software Operating System and Graphical User Interfaces, Produced by Microsoft. 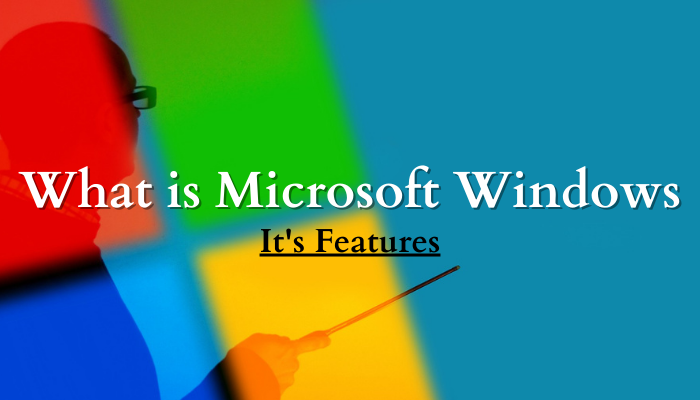 What is Control Panel?

Control Panel (Windows):- The Control Panel is a part of the Microsoft windows graphical user interface which allows users to view and manipulate basic system settings and controls.

The Control Panel has been an inherent part of the Microsoft windows operating system since its first release (Windows 1.0), with many of the current applets being added in later versions. Beginning with windows 95, the control panel is implemented as a special folder, i.e. the folder does not physically exist, but only contains shortcuts to various applets such as Add or Remove Programs and Internet Options. Physically, these applets are stored as .cpl files. for example, the Add or Remove Programs applets is stored under the name appwiz.cpl in the SYSTEM32 folder.

Many of the individual control panel applets can be accessed in other ways. for instance, Display Properties can be accessed by right-Clicking on an empty area of the desktop and choosing properties.

The classic view consists of shortcuts to the various control panel applets, usually without any description. The categories are seen if the user use “Details” view.

The category view consists of categories, which when clicked on display the control panel applets related to the category. In Windows vista the category displays links to the most commonly used applets below the name of the category.

Taskbar :- In the Graphical User Interface (GUI) for a computer operating system or application, a taskbar is a visual device on the desktop that typically shows the user which applications (tasks) are currently active and running. Some taskbars, such as those in windows operating systems. also include icons for commonly-used utilites such as the system clock and antivirus software. In some systems, the user is allowed to modify the contents, location, or appearance of the taskbar.

In GUI interfaces, the taskbar is a desktop toolbar application that lets you perform tasks such as switching between open windows and starting new applications. The taskbar is usually associated with the microsoft windows interface.

What is Graphical User Interface (GUI) ?

Graphical User Interface :- A GUI is a graphical user interface to a computer.

A GUI is a type of human computer interface a system for people to interact with a computer that uses windows, icons, pull-down menus and a pointer and that can be manipulated by a mouse or a keyboard.

A GUI represents a major advance over the command Line Interface (CLI) of the console, which displays text and is accessed solely by a keyboard. with the increasing use of multimedia, as part of the GUI, sound, voice, motion video, and virtual reality interface seem likely to become part of GUI applications.

A system’s GUI with its input devices is sometimes referred to as its “look-and-feel”.

What are the Feature of Graphical User Interface (GUI) ?

The Feature of GUI are :-

What is Windows Operating System ? Name its Elements ?

Windows is a Personal computer Operating System from Microsoft that, together with some commonly used business applications such as microsoft word and excel, has become a defacto “standard” for individual user in most corporations, as well as in most homes.

The original 1985 version of windows introduced to home and business PC users, many of the graphical user interface (GUI) ideas, that were developed at an experimental lab at Xerox and introduced commercially by Apple’s Lisa and Macintosh Computers.

Some of its main elements are :-

What is an Icon ?

A Computer icon is a graphical Symbol that represents a property, function, or entity. In Computer Applications, icons are used to quickly execute commands or open programs and documents. we access the functionality behind an icon by clicking or double-clicking it. Operating systems often allow us to customize visuals of various objects by applying our own custom icons.

Folders are used to organize the data stored on our drives. The files that make up a program are stored together in their own set of folders. we want to organize the files, we create in folders. we may also want to store files of a like kind in a single folder.

What are Option buttons ?

Option buttons allow us to make one choice among two or more options. They frequently appear in dialog boxes. The Picture below shows three option buttons. The “Flip vertical” option is selected.

What are check boxes ?

Check boxes allows us to select one or more independent options. Unlike option buttons, which restrict us to one choice, check boxes allow us to choose multiple options at the same time.

When a document, webpage, or picture exceeds the size of its window, scroll bars appear to allow us to see the information that is currently out of view.

To operate a Scroll Bar:-